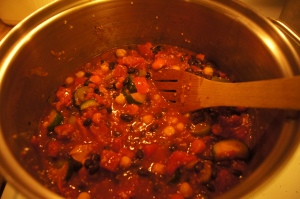 Like I said before, these 31 days of Pinterest trials are going to take a while since I am not forcing myself to complete this goal in a strict timeframe. Tonight I made Vegetarian Quinoa Chili. I found it a few nights ago when I was trying to make a meal from food I already had around the house. The amazing thing is, I had most of the veggies for this recipe already in the fridge. I had bought these veggies a few weeks ago in hopes to make another recipe, but I was lazy and let them sit and nearly rot. They needed to be used really soon.

While I had the veggies, I was missing the proper amount of canned tomatoes, so I wasn’t able to cook this recipe until I went grocery shopping. I decided to prep the veggies so that they were ready to go, I am trying to be a better time manager. After cutting all the veggies, I realized I had enough for two batches. I put half the cut vegetables in the freezer to be used when I make this recipe again and the other half in the fridge in preparation for tonight. Feeling extra great about my freezer these days. Helping me save money and time.

This chili recipe is super easy. Having most the prep work done ahead of time made it that much easier, of course. The results were delicious. A hearty, healthy chili. I will make this again and not just because I already have the veggies cut in the freezer ready to go, that is just an extra bonus.